Martin is the founder of Christian Fredrick Martin, 1796 was born in the German Elbe River. His father was a carpenter. At the time, the guitar has not been recognized people. His father sold by hand-made guitar, violin offended local manufacturers. (Probably was the violin maker has formed a class artist, but as a large carpenter Martin is just the reason civilians.) In 1807, his father was ordered to suspend business.
Once you know the rudiments of guitar making, Martin came to the music capital of Vienna to become the production violin and guitar Mingjiang ── old disciple John. (Incidentally, it is like the old John Schubert made violin.) In Vienna after the marriage, Martin returned to his hometown, made a formal license guitar manufacturing. To get rid of the interference, and later emigrated to the United States. Because the words "EST.1833" earliest Martin Guitar on it, so it is widely believed that he moved to the United States was on 1833.
The second year (ie 1834), No. 6 Niuyue Ha Hudson Street, opened his first guitar shop. But New York is in a rapid process of urbanization, in order to seek a more stable living environment, in 1839, recommended by a friend, and moved to Pennsylvania. Here he produced guitar by John Cooper coached guitar classroom for its sales. The works of this period and resembles the old John, for example, similar to the single row Fender tuners, adjustable neck angle regulator. From 40 to 50 years, Martin focused on the interior design of the piano chamber. He added on the inside of the dashboard wood X-type force, the strength of this design more than ever fan type.
In the X-type design studies come to an end in 1856, a surname Gibson boy was born in New York. Martin Guitars time it has been largely fixed. Completion of these great achievements of Martin I, in 1873, passed away, took his nephew C.F Martin Jr. Because sick, Martin II has died at age 83 in 1888, his son Frenk.Henry.Martin inherited their wishes. And, than Martin in 1894 after about 60 years later, as Gibson shoe store clerk began to turn instrument maker.
Ma Dingqin model, based on multi-Roman characters or numerals. 1850 series is produced by 3,2-1 / 2,2,1 four numerals. In 1854, the size of the piano began reunification. 0 added 5,4,3 and lower models, 1877, type only appeared 00. Until recently, I also believe that with the D 0 corresponding to Roman O, read the relevant books, before we know should be the number 0.
Perhaps, in the narrative some time again, but it is worth mentioning that in 1916 a product of today's guitar had a significant impact. At the time, Martin is a New York production of piano series guitar, listen to Henry's suggestion piano, and began piano singer designed a large body guitar. Because the piano body unprecedented large, the British battleship named, is referred to as D-type. After the production of a spruce, mahogany for the piano, 12-type products 111,222,333. But in fact, in 1931, the company began production of 12 products Martin brand piano, when the D-1 and D-2 type which later became the D-18 and D-28 predecessor. Type D has become almost synonymous with guitar, piano and shape wood has become a standard guitar.
In the old D-28 models, the kind known as "Hailin Bo" (transliteration) guitar had special treatment. Piano inside edge of the specially decorated. Around 46 years, "Hailin Bo" End production, D-28 appeared in force wood shaped charges, in the center line of decorative panels plus other changes, welcomed by customers. 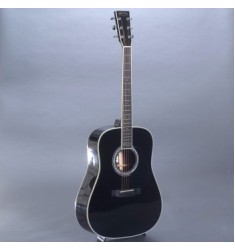 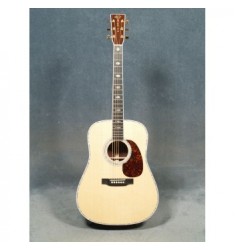